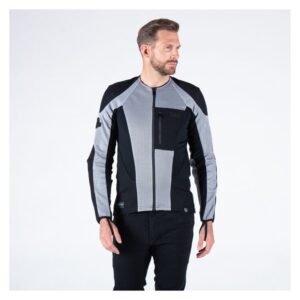 Summer is fast approaching here in the Southeastern United States and things are heating up fast around here. In order to beat the heat this year I have replaced my Knox Zephyr jacket with the new Urbane Pro Mark II Riding Shirt. Not that there was anything wrong with the Zephyr but ever since getting the Klim Ai-1 airbag vest the Zephyr, which was already snug, was just too tight to fit over the vest. With the Urbane Mark II I ordered a size larger (XL) to accommodate. Since the Urbane Pro Mark II is a new product for this year it took a few weeks to arrive but now it’s here and has already been out  a couple of times for “shakedown” cruises. A review is underway now which will be published to webbikeworld.com soon.

“But what if it’s really cool out for some reason the Urbane, a partially mesh jacket, isn’t going to keep you warm?”

As it happens, the other day I was asked by Viking Cycle if I would be interested in a review of one of their products. Taking a quick look at their offerings I saw there were a couple of textile jackets that might do the job for those not too hot, not too cold days. In particular the Ironborn jacket has a cut that I like and appears to offer mulitple vents. This could make it a good “all-rounder” for those days between Spring and Summer and between Summer and Fall. (Of course those days are getting shorter and shorter here in Tennessee.)

The Ironborn Jacket in Military Green (photo via Viking Cycle)

While the look and feature set of the Ironborn aren’t really that hard to find in other textile jackets from other manufacturers, the fact this jacket sells for $74.99 might get some attention, however. Usually I wouldn’t give riding gear at this price point a second look as one often gets what one pays for. However, the jacket has an interesting look (especially in the military green color) and Viking Cycle claims the shell is CORDURA®. They also include CE approved armor and an insulated vest liner.

Now this all sounds a bit too good to be true (OK, more than a bit) but I’m going to give them the benefit of the doubt and take delivery of one of these jackets for review. The most important factor here is that they specifically asked for an honest review. Anyone who has read my reviews in the past knows while I may not get “mean” in a review I will call it as I see it, for better or for worse.

Theme by Anders Noren — Up ↑